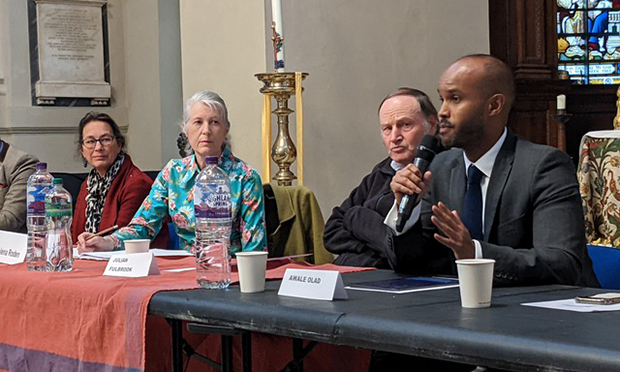 Concerns over plans for a new tower block near the British Museum was the major talking point at a hustings in Bloomsbury.

Residents gathered in the splendid setting of Nicholas Hawksmoor’s St George’s Church to talk to election candidates about their concerns.

Only the Labour candidates, who are all serving councillors, were able to speak at the pre-election hustings organised by Save Museum Street because other would-be councillors had commitments elsewhere.

The Save Museum Street community coalition is fighting proposals by LabTech to replace the 17-storey former Travelodge hotel, known as Selkirk House, with a taller office block with 48 homes.

Campaigners are concerned about the impact on listed buildings including the British Museum and St George’s Church, where novelist Anthony Trollope was baptised.

Initially the developers wanted to increase the height by 26 metres to create a 21-storey tower.

After a consultation, it cut the design by six metres to leave them with a 19-storey, 20.4-metre tower.

It said: “This is a notable reduction of two storeys and reduces the impact of the tower on key London skyline views.”

Julian Fulbrook (Holborn and Covent Garden candidate) said he was concerned about the height.

He said: “This is not Manhattan, it is a residential neighbourhood.”

He added: “This tower is going to cast a shadow on iconic places like this church and the British Museum. We do not want a sundial like Centre Point.”

Rishi Madlani (Bloomsbury candidate) said he was “unequivocally against this planning application”, adding: “We need to oppose vociferously.”

He suggested the community needs to also look at mitigants to reduce the impact if the plan gets the go-ahead.

Sue Vincent (Holborn and Covent Garden candidate) did not comment on the application as she may again be asked to serve on the planning committee, which could determine the decision.

She said she is concerned about improving the safety and security of the area.

A resident from Central St Giles asked about safety.

Awale Olad (Holborn and Covent Garden candidate) said he was concerned that police move on after 18 months.

“We do need officers who know the neighbours and know who the key criminals are,” he added.

He said that around the time of the 2012 Olympics, drug dealers were “pushed out from Westminster” and moved their trade to Covent Garden.

One Bury Place resident said if Selkirk House gets the go-ahead, along with work to the Holborn Tube, it is “going to make living in Bury Place a horrible situation”.

He asked if Bloomsbury Square could be opened up to traffic again to cope with this.

Vincent said: “There definitely should be a change for traffic to go down the east side of Bloomsbury Square, because the smell, the pollution, you can smell it at Bury Place when you walk down there.”

A Covent Garden resident raised concerns about a plan with one-way traffic from Long Acre and Sheldon Street that has seen construction lorries and buses in the area. They fear it will lead to an accident.

Olad said the low traffic neighbourhood in Covent Garden is a trial brought in during the pandemic.

“We are listening to what residents have got to say about that,” he explained. “If we are making it worse, certainly we will do our best to mitigate those problems or introduce more restrictions if we have to.”

Residents also said they were concerned about opportunities for young people setting up businesses.

A full list of candidates for the Bloomsbury and Holborn & Covent Garden wards is as follows: