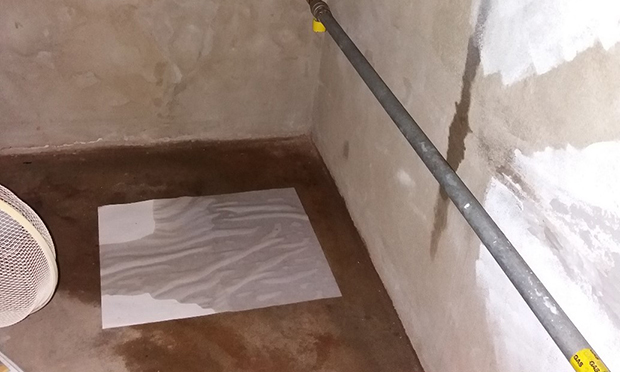 “My health deteriorated at a very rapid rate,” said a resident who had to shield in a damp council property in Camden during the pandemic.

Ms X moved into a basement flat in a converted Victorian house as part of a mutual exchange in 2016, but she said the conditions have affected her health.

There was black mould in the hallway, buckets to collect water, and the “rail in the living room was so damp that paint would no longer adhere to it”.

“It took me five years to get through this,” she said.

Ms X’s asthma has worsened and she has had to take steroids to control it.

She asked Camden Council to deal with the damp but delays meant she resorted to asking councillors and her MP Keir Starmer to step in.

Eventually she took her concerns to the Housing Ombudsman, which ordered the council to pay her £3,000 for the “distress and inconvenience” caused by its “failures and delays in addressing the repairs to the property”.

She said the impact on her health “compromised” her immune system, adding: “I had to be shielded when the pandemic struck I was stuck in the flat that was causing me the problem. I got really low.”

She was finally moved from the flat in Parliament Hill last autumn.

The council rented the flat from a leaseholder and asked for repairs to get underway when Ms X raised her concerns.

The Housing Ombudsman said the council did take steps to get repairs done.

Its report said the Town Hall knew there was damp in the living room in 2017 and an inspection pinpointed the problem as “likely” coming from a cupboard under the stairs.

The report said by the time Ms X put in a transfer request in September 2018, “the landlord was aware that the damp in the property was extensive and an urgent transfer was required due to health and safety concerns”.

The Ombudsman said: “Given the landlord’s responsibilities under the terms of the tenancy agreement, it is of concern that in over four years since these issues were identified, there is no evidence of substantial works being completed at the property.”

It said that whilst the council tried to repair outside steps and clear a drainage block, there was “no evidence of any repairs to address the damp issues or repair plasterwork”.

The complaint is one of 10 that the Housing Ombudsman looked into in Camden in the last two years. It found maladministration in 80 per cent of the cases, and Camden Council was in the list of the top ten councils and housing associations for complaints about damp.

In his report about cases in the UK, ombudsman Richard Blakeway said: “You can see the distress, disruption, even embarrassment, felt by the resident. You can see the evident concern about their health and well-being, especially mental health; the impact on any children.

“Whether or not we uphold their complaint, this experience is real, and it is profound.”

The Ombudsman recommended the council reminds staff handling mutual exchanges and complaints of its policy for a surveyor to inspect the property and draw up a list of repairs that the council and tenants are responsible for.

The Local Government Ombudsman also found Ms X had suffered injustice and ordered the council to pay her £150.

Ms X also urged the council to do preventative repairs to save money and the impact on residents’ health.

A Camden Council spokeswoman said: “We want all of our residents to be living in well-maintained and safe homes.

“In response to the Ombudsman’s recommendations, we have introduced a new process of handling repairs for properties where we are not the freeholder to ensure that the issues highlighted in this case can be avoided in the future.

“We are also ensuring all void and mutual exchange properties are thoroughly inspected prior to residents moving in to identify any works that may need to be completed. “

She said the council has set up a dedicated team to work with residents “to establish the underlying causes of damp and mould within their homes and carry out any related repairs as soon as possible”.

There is also a new  customer services team to look into cases and advise residents.