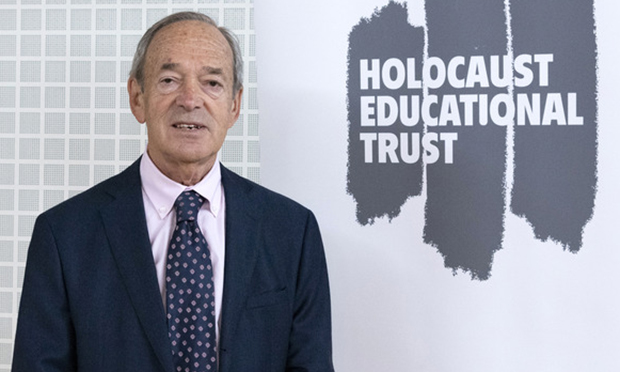 When Ivan Shaw was just five years old, he was held in a Nazi prison cell overnight by himself awaiting deportation, after his hiding place was given away.

The Gestapo, or German police, loaded him on to a transit lorry to send him to the concentration camps the Nazis had set up across Europe.

Now 82, Shaw has shared his story with thousands of young people to prevent the terror he and millions like him faced during the Holocaust from ever happening again.

He has been awarded a BEM (British Empire Medal) in the New Year’s Honours for his bravery in recounting his experiences for Holocaust education and awareness.

The Highgate resident said: “It’s very emotional and painful what happened to me.”

He was born in February 1939 in Novi Sad, in former Yugoslavia, which is now Serbia. He was the only child of Gertrude (Trude) and Andor, and the family lived in an apartment block in the city centre until the Germans began rounding up Jews in 1944.

His mother was ordered to go to an assembly point but his father was not called as he was half-Jewish. Despite the entreaties of his sisters, he left as he could not abandon his wife and thought their son would be safe with his family.

The little boy was cared for by his aunt until a neighbour gave them away and the Gestapo came for the child. However, one of his aunts was able to follow his movements from a transit camp to the train station. She managed to snatch him from the line and hide him in a forest before concealing him at home until the end of the war.

His family perished in the camps and he came to England in 1947 to live with an aunt and uncle in Amersham.

His mother was sent to Belsen and died only a few days after it was liberated.

Decades later, his son Philip married Clare, whose grandfather Reg Dark was amongst the British soldiers who liberated the camp.

Shaw didn’t speak about his family’s horrific experiences for years.

He said: “I sometimes think it happened to someone else.”

He worked at Marks and Spencer as a textile technologist alongside Justice Secretary Dominic Raab’s father Peter, who came to England as a Jewish refugee aged six. Neither man spoke about their experiences.

It is only in the last few years that he has spoken about the Holocaust because he believes it is important to bear witness as a survivor. He became a speaker for the Holocaust Educational Trust and has spread the message of tolerance to thousands of young people.

He added: “There’s been such an increase in anti-Semitism.

“I wish there was more tolerance of other people’s views.”

He warned about the lack of respect for differing opinions, as intolerance can give rise to hatred. He said the Nazis burnt books and then destroyed people.

During lockdown he started talking to students online – just before Christmas he gave a talk to 280 pupils in Nottingham.

Shaw’s nominator for the honour said: “To relive such difficult early childhood experiences voluntarily takes an extraordinary amount of courage, but Ivan wishes to continue to speak out about his, and his family’s experiences in the name of Holocaust education and remembrance, even when it is difficult to do so.”

Shaw said the honour was important for the many people who have bravely shared their stories to educate the next generation.

“The Holocaust Educational Trust have done a tremendous amount to keep the Holocaust memory alive and it should never be allowed to happen again.”