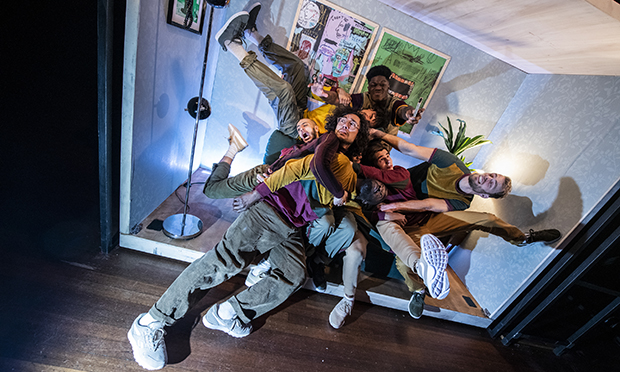 The Peacock Theatre is packed to the rafters with young and old alike cacophonous in their excitement. All geared up for an evening of energetic Dutch blokes spinning themselves around the stage. The Ruggeds have landed in Holborn.

The yearly festival Breakin’ Convention has its fingers in many a creative pie. From the festival itself to Open Art Surgery, to emerging new work and highlighting companies of merit.

The Ruggeds made their Breakin’ Convention debut in 2015 and have since gone from strength to strength, working with the likes of Justin Bieber, NBC’s World of Dance, and Madonna.

Now they return with a new piece, Between Us, finally seeing the light of day after being postponed due to everyone’s least favourite pandemic.

A cross-section of a house made using bars and panels (a little Westside Story-esque), the set by Ido Koppendaal, Mike Merrington and Remy van de Pas is an interesting way of dividing the space. Multicoloured lights and a large TV set, coupled with the constant movements of dancers up and down ladders, mean the show is not all on one level – although a lot of the break-dancing is on the ground level.

Roy Overdijk’s choreography is spirited, with a nice use of physical humour that is family-appropriate without being insipid. The show is a crowd-pleaser, without much focus on narrative, but with plenty of characterisation. It’s the personalities involved that really warms the cockles of your soul, as some of the group work could be tighter. Like friends watching telly, goofing around, and dancing the show has a male camaraderie without the competitive edge and aggression sometimes expected from dance crews.

Overdijk (also dancing, amazingly) especially has a lightness to his movements, with a particularly engaging contortionist section. Niek Traa is the driver of a lot of the action and a focal presence for the work. Rico Ebenizer Coker flies off the ground with awe-inspiring feats of acrobatics, and Sjoerd Polderman is the clown of the evening, with gifted facial and corporal comedy. Every dancer has their own skill, be it headstands, handstands or spins, and each is given a moment to showcase this uniqueness. Unfortunately, sometimes the linking sections between them are where the energy is dropped, with some clunky sound changes that impact the flow of the piece.

The dancers feel like friends, vibing with group sections, bouncing off one another, laughing and chattering away in their native language. In the audience, children scream with laughter and the joy is infectious.

The show is a heartfelt ride of friendship, dance ability, and comedy. It doesn’t reinvent the wheel but it provides an unpretentious evening of fun. And who doesn’t like fun?

Breakin’ Convention Presents The Ruggeds: Between Us ran from 15-18 September at the Peacock Theatre.