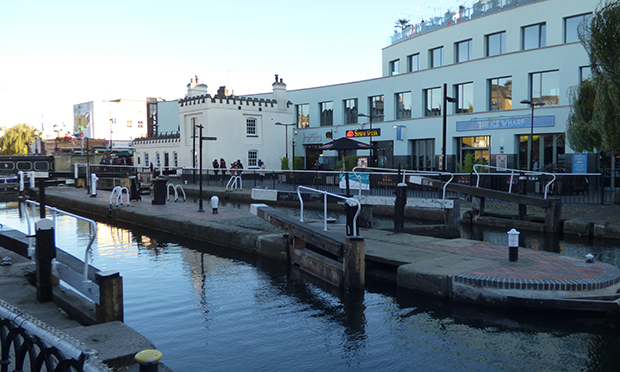 Concerns over the cumulative impact of late-night openings has put paid to a Camden Town pub’s desire for longer hours at its beer garden.

The Ice Wharf on Jamestown Road asked the council if it could keep the garden open until 11pm on Thursdays to Saturdays,  and emptied of drinkers by 11.30pm. Currently it is cleared of customers by 9.30pm on those days.

Lawyer Nigel Connor for owners Wetherspoons said the pub had proved it could open the garden later with success.

The venue also applied for extra time for on and off sales on Sundays to Wednesdays, instead of the current 10am to 11.30pm. It wanted to serve alcohol from 9am.

The pub can already sell alcohol from 9am on Thursdays to Saturdays, and it is licensed until 1.30am on those days.

Connor said it is not a big money spinner for the company and most early customers want coffee or breakfast.

Dennis Viechweg, from the licensing authority, said there was no objection to extending the hours of drinking in the morning, but it was possible that drinking outside until 11.30pm could have an impact on the area.

He said the council’s policy was to oppose late hours because of the cumulative impact zone in Camden Town.

Patricia Thomas from the Harmood, Clarence, Hartland Residents’ Association said: “The area is known as very noisy and difficult.”

Tenants and Residents of Camden Town (TRACT) said: “The beer garden is a significant cause of disturbance and anti-social behaviour, wtih noise generated by crowds of inebriated customers and significant littering of the canal.

“It is completely unacceptable to local residents that the beer garden is allowed to open past 9.30pm.”

Connor told the licensing panel: “We are not aware of any concerns raised by residents on the  start of sale of alcohol from 9am on Thursdays to Saturdays.”

He said the sales for that hour were £300 over four weeks, so were “extremely limited”.

He explained that although the beer garden can already open late from Wednesday to Sundays, the pub already closes at 10pm and is cleared by 10.30pm “on a voluntary basis”.

“We have no intention to cause problems to residents,” he said, and added that the impact of coronavirus meant the pub is “currently operating at 80 per cent”.

He went on: “We haven’t had any issues raised by neighbours about the longer extended hours we trade earlier in the week and think that’s significant.”

Police got in contact during lockdown when the pub was shut because people were using the beer garden.

Connor said the company fenced it off to stop people getting in and causing problems and staff came to clear litter away.

He said anti-social behaviour happens after the pub is closed.

During the panel’s deliberations in public, councillor Oliver Lewis (Highgate) said he did not think he had “heard enough” to make an exception under the cumulative impact zone policy.

Panel chair Leo Cassarini said: “I don’t see, when adding extra hours where the capacity of the venue will be increased, how you can make an argument it won’t have an impact.”

The licensing panel (24 August) turned down the application but encouraged the venue to continue working with the police on ways to manage the outside space.