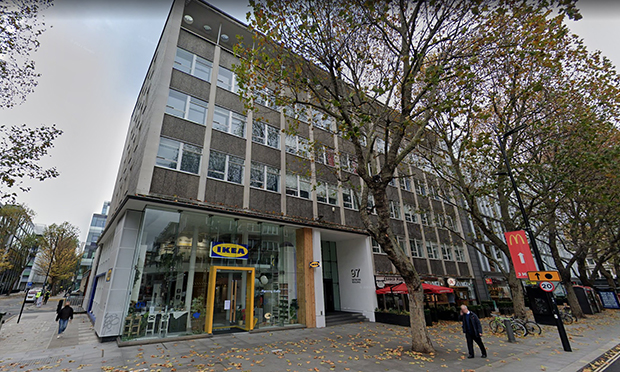 Camden’s planning boss has given his blessing for a controversial office development to go ahead without the legally-required number of affordable homes – after developers complained that their £20m profit showed the scheme wasn’t “financially viable”.

Plans to demolish Tottenham Court Road’s Network Building and build a nine-story office block in its place were submitted last December as part of a £260m project by Derwent London PLC.

Under existing council planning requirements, the development should have included at least 62 new homes – of which 27 needed be to be affordable.

The plan – which also includes erecting a six-storey residential building on the site of the former Tottenham Mews Day Hospital – was recommended for approval despite failing to meet those targets.

Camden’s principal planner Gavin Sexton greenlit the scheme after Derwent insisted that it needed a £40m profit to make the operation financially viable.

His report recommending that councillors vote to approve the scheme notes that its £20m projected profit in comparison meant that it already provides the “maximum reasonable contribution to the provision of affordable housing”.

To avoid having to provide housing on the lucrative Network Building site, Derwent agreed to build a block of flats where the former Tottenham Mews Day Hospital once stood.

But that plan provided only 23 homes – and only 12 were available as social housing.

The remaining 11 units met the ‘affordable’ criteria by being offered up for ‘intermediate’ rent – meaning households with gross incomes between £31,950 and £42,600.

Those 12 social housing units dropped to 10 when Derwent bumped two up to intermediate status after the council ordered changes to the building’s facade.

The change was approved despite the Camden Local Plan seeking a 60:40 split per square metre between social and intermediate rent for new developments.

This was overlooked after Derwent insisted that the scheme already provided more affordable housing than necessary – by claiming that the development would only be ‘financially viable’ if it made a profit of over £40million.

Documents submitted to Camden council say the development is on track to return a profit of just over £20million – which would be further hit by an order to include more affordable housing.

An ‘objections’ section of Sexton’s report showed that residents raised concerns over the lack of housing provision.

One wrote: “Strongly object to the lack of housing and affordable housing that would be created from this development.

“Under policy the housing target is about 62 homes with up to 27 affordable homes, however only 23 homes are offered and just ten of these at social rent.

“The proposals deliver a net loss of market homes and an insufficient number of affordable homes.”

The recommendation came after a lengthy back-and-forth between Camden Council auditor BPS and Derwent’s consultants DS2 over the extent of the scheme’s inviability.

DS2 initially claimed that the social housing units were valued at £153 per square foot.

They also refused to provide evidence for £3million worth of ‘third party transactions’, which saw the total removed from the final estimate.

And a £50,000 bill for renovating an existing flat was withdrawn when BPS investigators found that no renovations were needed.

DS2 then claimed the £50,000 was actually for adjustments to a third-floor office – even though office refurbishment and maintenance had already been budgeted for.

They also claimed that the affordable housing requirement was so excessive that Derwent should be given a credit that allowed them to build fewer affordable units in future developments.

But they backed down after BPS accused them of inflating the credits’ value by not considering alternative approaches.

The report read: “We consider DS2’s calculation of the value of these credits to be flawed. We identified two alternative approaches, both of which significantly reduced the value of the credits.

“DS2 have now removed the affordable housing credits from their viability assessment.”

Last year Derwent paid a staggering £10million to just five executive directors – despite the group turning a £278million profit in 2019 into an £81million loss in 2020.

CEO Paul Williams raked in £2.1million – including a £600k bonus and performance-related share awards of over £770k.

← Over a third of council tenants and leaseholders do not feel safe in their homes, survey revealsNew lease of life for Camden bar where Amy Winehouse used to sing →