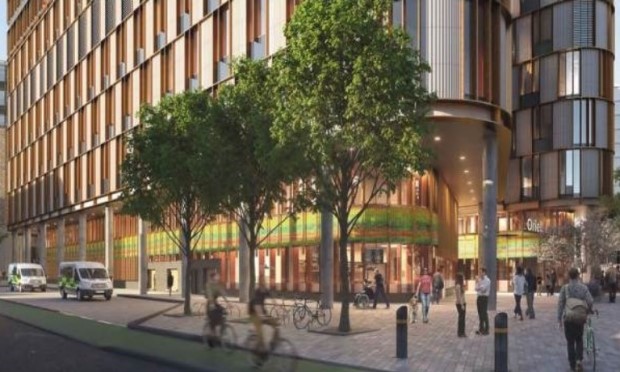 Councillors are set to consider the redevelopment of St Pancras Hospital to make way for the new home of Moorfields Eye Hospital, in what a planning report describes as a “major step” in the the transformation of NHS services across North Central London.

The scheme, known as Project Oriel, will see the demolition of seven buildings on the site and construction of an up to ten storey medical research and education centre for Moorfields, the UCL Institute of Ophthalmology and Moorfields Eye Charity, while services run by Camden & Islington NHS Foundation Trust (C&I) will relocate.

A recent consultation found “overall support” for the move of Moorfields to St Pancras, with the existing City Road site with some over-century old buildings considered no longer fit for purpose and unable to “maximise opportunities to deliver excellent science,” with Oriel projected to facilitate major investment in eye care and mental health provision.

A planning report on Oriel reads: “The proposed development is considered to mark a major step in the implementation of joint NHS Service Transformation plan prepared by the North Central London health providers. The development would be paid for via the release of surplus land at the City Road site by Moorfields.

“It would also generate a capital receipt for Camden & Islington NHS foundation trust that would be used to pay for new and enhanced facilities across their portfolio, including a brand new mental health ward in Highgate as well as plans for the future redevelopment of the wider St Pancras Hospital site.

“As well as providing a new, purpose built facility for the study, research and provision of eye care for London, the works would also allow for major investments in facilities for mental health provision. The development can therefore be seen as key to the implementation of the strategic service transformation plan.

“In addition, through the enhancement of community safety, offer for the advancement of local employment opportunities and community outreach as well as the contributions towards infrastructure for walking and cycling and public transport, the development is considered to result in enhance local health and wellbeing outcomes.”

Under the plans, C&I will sell a portion of the St Pancras site on which they currently operate a range of services to Moorfields to generate capital for a new purpose built mental health facility in Highgate and at the Whittington Hospital, with a planned relocation of existing inpatient services from St Pancras to a site behind the Whittington while retaining clinics, offices and research facilities at King’s Cross.

A planning report summarises their comments as: “This new centre will bring major advancement for the treatment and research into childhood sight loss and attract the finest talent in the field. The centre would offer the very best environment for patients and staff.

“[The] proposed development will allow Moorfields to continue its world-leading clinical outcomes and attract, inspire and retain the most talented clinicians, researchers and educators. [We are] impressed with the engagement that the team has had with those who would directly benefit from the centre, with young people who also work with RSBC contributing their thoughts on the proposals.

“[The] proposal would create high quality public realm for patients and staff, with active uses at ground floor such as café, retail and education, [and] will also signify a major investment for the local economy, provide local training and employment opportunities as well as being a highly sustainable building.”

Councillors will next week consider wideranging aspects across the development, including concerns raised by the Victorian Society over the impact on the historical site, as well as an objection from local amenity group The Regents Network, which while supporting the principle of the development criticises the development as “very large, bulky, unappealing and overly dominant.”

Other objectors are also quoted in the report as being overall supportive of the principle of the works, while urging measures be put in place over the ‘last half mile’ between transport and the development, with calls for tests over potential use for tactile paving to aid greater accessibility and green lines directing people from stations to the new bus stop for the site.

You can read the full report here.

← Ultra-Low Emission Zone expansion to go ahead this year, London Mayor confirmsOver a third of council tenants and leaseholders do not feel safe in their homes, survey reveals →