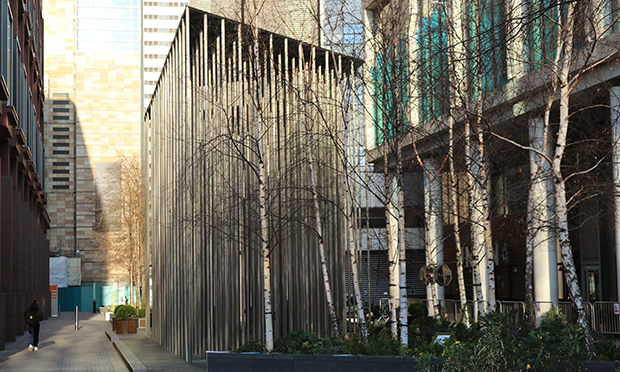 With the weather warming but culture still locked down, art-lovers with itchy feet can indulge their passion by sampling London’s rich array of public art. A tantalising range of modern artworks are there for the flâneur to enjoy, and with parts of London especially quiet at the moment, this is a good time to meander.

Bloomsbury is a good place to start, with its squares and parks forming a veritable open air sculpture gallery. Particularly notable works include Lydia Kapinska’s Green Man in Woburn Square, View by Naomi Blake is in nearby in Fitzroy Square, Emily Young’s moving Archangel Michael – a memorial to the victims of the 7 July 2005 bombings – outside St Pancras New Church, and the statue of Isaac Newton by Eduardo Paolozzi that graces for forecourt of the British Library.

Nearby in the area just east of Regent’s Park you can sample Seated Figure by Jean Bullock at Westminster Kingsway College on Longford Street and the variety of sculptural works in the Regent’s Place office complex, including Carmody Groarke’s Regent’s Place Pavilion, just off Osnaburgh Street.

If you’re heading to the verdant pastures of Hampstead Heath, don’t forget to take a peak at Henry Moore’s Two Piece Reclining Figure No.5 (just to the south-west of Kenwood House).

If instead you venture further east into the urban heartlands, you can take wander the open-air Sculpture in the City sculpture trail. This edition of the trail is still in place from when it first went live in 2019, but if you have not yet had a chance to follow it, quiet lockdown days in the City are a great time to take a wander.

Highlights include Kevin Francis Gray’s Reclining Nude, nestled in St Botolph-without Bishopsgate Churchyard, Nancy Rubins’ exuberant Crocodylius Philodendrus at 1 Undershaft and It Was Only a Matter of Time Before We Found the Pyramid and Forced It Open, by Salvatore Arancio at 1 Great St Helen’s.

Finally, if you are really up for a hike, The Line charts a somewhat discontinuous collection of sculptures strung out roughly along the meridian line from Queen Elizabeth Park on the former Olympic site in Newham to North Greenwich (via the Emirates Air Line cable car across the Thames).