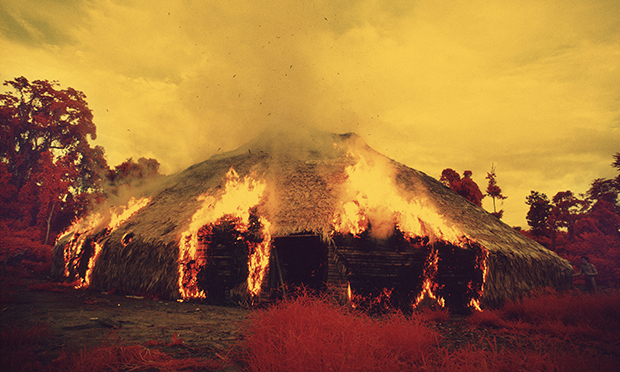 The curator of an upcoming retrospective at the Barbican for Brazilian photographer and activist Claudia Andujar says audiences must “take on responsibility” for ethical issues they encounter through art.

The Yanomami Struggle, which will open in June, features over 200 photographs from Andujar’s long career, as well as audio, film and drawings.

As the title of the exhibition suggests, it will focus largely on the plight of Brazil’s Yanomami people, a cause taken up by the photographer in 1971 while she was working in the Amazon.

The Yanomami are one of the country’s largest indigenous populations, but their territory is under threat from gold miners.

Curator Thyago Nogueira told the Citizen: “When you see something, when you look at something, you need also to understand that you get the responsibility, the ethical responsibility that lies beyond what you’re looking at.

“I hope that with this exhibition people will understand that visual culture is not innocent, or cannot be taken as something that is naive, and that it has to seduce people to take on the responsibilities of the things they are looking at.”

Andujar was born in 1931 in Neuchâtel, Switzerland, and moved to Brazil in 1955 after 10 years living and working in the United States.

She has been vocal about defending the Yanomami, whose safety has now been put at further risk by the ongoing coronavirus pandemic.

Andujar said: “I started working with the Yanomami in the 1970s and they quickly became a second family to me. When I saw the threats they were facing, I decided to devote my time to helping them obtain the demarcation of the land they occupied so that it would be officially recognized by Brazilian law.

“After many years of struggle, we succeeded in our efforts. Sadly, their lands have once again been invaded by gold miners and so I hope that my work will continue to raise awareness of the dangers facing the Yanomami.”

Also worthy of note is Andujar’s experimental photographic style. She is known for creating visual effects by applying Vaseline to her camera lens and by using flash devices, oil lamps and infrared film, as well as for her arresting black and white portraits.

The Barbican’s head of visual Arts Jane Alison said: “The work of this inspirational artist and activist provides an unparalleled insight into the lives of the Yanomami and shines a light on the violence perpetrated against them through illegal activities, hostile forces and corporate greed.

“The visceral power of Andujar’s photography has never been more relevant, as the climate emergency and the impact of Covid-19 continues to threaten the Yanomami and the Amazon basin.”

Aside from her artwork, Andujar co-founded the Pro-Yanomami Commission in 1978 and began the 14-year campaign to designate the Yanomami homeland.

The exhibition will celebrate the intersection between Andujar’s art and activism, and will continue to raise awareness for this pressing issue.

Claudia Andujar: The Yanomami Struggle will run from 17 June until 29 August at The Curve, The Pit and the Barbican Foyers, Barbican Centre, Silk Street, EC2Y 8DS.