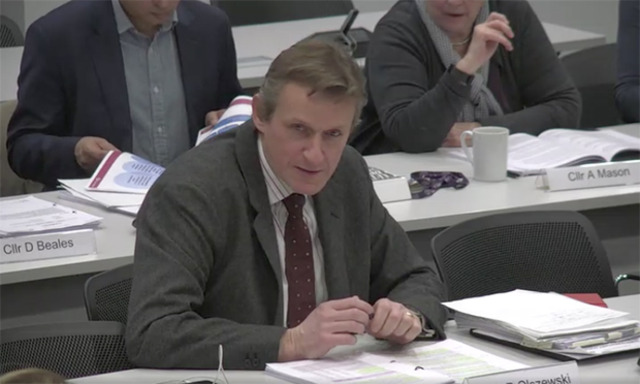 Council tax in Camden is set to increase by 3.99 per cent – an extra 92p per week for the average household.

Though the borough’s budget gap could hit £40m over the next two years, Cllr Richard Olszewski (Lab & Co-op, Fortune Green) underlined that the recent expansion of its hotspot teams working with rough sleepers will continue be funded.

Cllr Olszewski, who is Camden’s cabinet member for finance and transformation, said: “Worth repeating for the public record even though it’s sounding like a broken record, as people do need to understand the situation we face, which is a cut in central government funding for the council since 2010 of 54 per cent.

“Cumulatively, that runs to several hundreds of millions of pounds of lost grant. It means that our budget is £169m less than it was when austerity was ushered in.

“And it continues. Government funding is being cut again next year by about £8m, and at the same time we face growing demands through a growing and ageing population and inflation.

“This means that over the coming years we need to fill a funding gap of £23m, and we project this to increase to between £35-40m over the next two years.

“Our focus remains on early intervention, prevention and using innovation across the field.”

The finance boss added that the gap is to be met through “savings programmes” within the council, use of one-off funding from the pool of London’s business rates, and by dipping into reserve cash to fund investments.

The council will also be investing £5m into employment services to help jobseekers in the borough, and will be waiving the £14 application fee for EU nationals living in Camden using its fast-track service to secure their settlement rights pending Brexit.

The review was expected to use the three main “cost drivers” of population, deprivation and sparsity in judging who receives what, alongside those unique to specific local authorities, according to House of Commons Library research released last year.

However, the government is currently considering removing factors including deprivation measures and homelessness levels from the decision-making formula on how Town Halls are funded, which has raised fears that funds could be siphoned off from boroughs such as Camden to more rural areas.