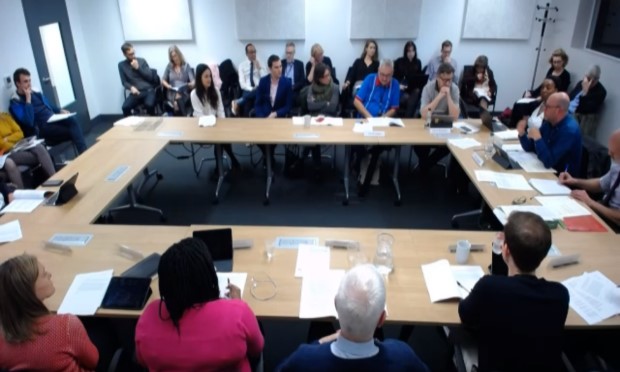 A cross-party campaign is calling for social housing lost in a fire to be replaced like-for-like by Camden Council.

Speaking at a 25 October meeting of Camden’s housing scrutiny committee, Labour activist Rebecca Shirazi spoke of her “serious concern” for the future of the site, with the support of Cllr Andrew Parkinson (Con, Frognal and Fitzjohns).

Shirazi said: “I am seriously concerned that the site will be sold off to a private sector developer with the three units of social housing not to be replaced onsite or elsewhere in the borough.

“Given this context, it is unethical for a Labour-run council to consider selling these three units of council housing to a private sector developer, with no plans to replace the units elsewhere in the borough let alone locally.”

“So therefore it’s important that we keep what we’ve got, so from our point of view the council should do everything it can so that we don’t lose anything more.”

It is understood that no final decision has yet been taken as to the future of the site by Camden Council, and that residents who had been living in the block have been rehoused.

The blaze is believed to have been instigated by a “human act”, though the extent of the damage to the property has rendered investigators unable to determine how the fire was started or by whom.

According to CNJ reporting of a coroner’s inquest into the fire, nobody from the council had been tasked with making regular checks of the fire alarms at Daleham Gardens.

Cllr Douglas Beattie (Lab, Kilburn), who chaired the committee, “heartily agreed” the calls to secure the future of Daleham Gardens’ social housing, saying: “I wholeheartedly see the point you’re making. I think no decision as yet has been made.

“My instinct here is that the committee should deal with this by making a formal recommendation to the cabinet member for better homes [Cllr Meric Apak] to see if we can replace these homes like-for-like in the ward, or if not in the ward, in the borough, with the caveat of it being economically viable to do so.”