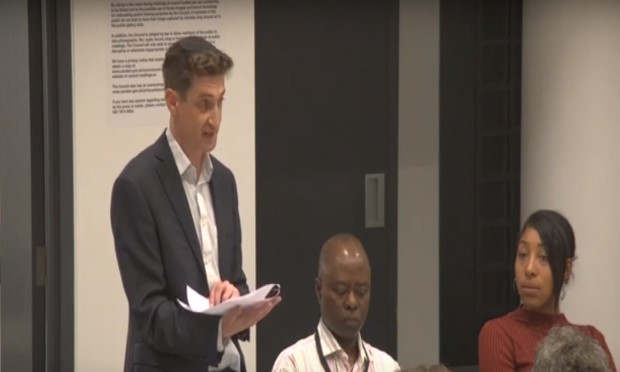 Social media companies based in Camden have been urged by faith leaders to become “part of the solution” in tackling hate speech.

Camden Faith Leaders’ Forum representative Neil Moss made the call as part of a themed debate on community cohesion at a Camden Council meeting on 8 October.

The latest Home Office statistics show a rise in hate crimes across England and Wales by 29 per cent on the previous year, with 80,400 offences recorded by police.

Moss said: “I’m proud that so many fantastic, creative digital and technology companies are based in Camden.

“I’m also too aware of the rise of hate speech in society. Muslims are seeing a rise in Islamophobia, there’s been a sharp rise in xenophobia, and social media is polluted with homophobia, misogyny, racism, and antisemitism.

“As councillors, next time you visit these shining technology companies, please encourage their senior executives to become part of the solution.

“Please remind them that as Camden local businesses, they too have a social responsibility to promote cohesion.”

Facebook announced in 2017 that its new engineering hub – its biggest outside the US – would be based in Camden.

Google broke ground on its new £1 billion London headquarters in King’s Cross in the same year.

Facebook revealed its 25-page ‘takedown’ guide for hate speech in April, which further codified its responsibilities for material posted by its users.

Whilst Google has its own anti-hate speech tool, Google Perspective, researchers at Aalto University and the University of Padu last month stated that workarounds such as typos, inserting spaces and adding innocuous words to the material could make offensive material undetectable.

Cllr Abdul Hai (Lab, King’s Cross), cabinet member for young people and cohesion, said: “That is why we put it up for debate, because we recognise that as a result of Brexit and Donald Trump,  an anti-immigration mentality has been created, so it’s about how we can work collectively.

“Going forward, I will convene a conference where we bring together our young people, schools, our business community, social media providers and youth clubs to see how we can work together by agreeing to a joint action plan, which will translate into a plan for the next three years.”

The debate also saw a clash between Conservative and Labour councillors as Cllr Maria Higson (Con, Hampstead Town) questioned the importance of community cohesion to the council.

Cllr Higson said: “If this is something we really believe in, why is it allowed to slip between the cracks of scrutiny committees?

“This doesn’t have a specific scrutiny committee for it, and we’re aware that the culture and environment [scrutiny committee] is heavily stretched, so I’d like to request that we look at this, as it’s really important work.”

This provoked a pushback from Cllr Awale Olad (Lab, Holborn & Covent Garden), chair of the culture and environment scrutiny committee, who said: “I wasn’t going to make a speech in this debate, but I thought I should respond to Cllr Higson’s unfair attack on the committee I chair.

“We do scrutinise community cohesion annually, and look at it every quarter, in particular areas where there have been conflict.

“There has been a serious increase in hate crime towards European nationals ever since the Brexit vote, and we’ve been looking at that closely, as well as towards the LGBT, Muslim and Jewish communities.

“[Cllr Higson] is more than welcome to attend these meetings and take part.”