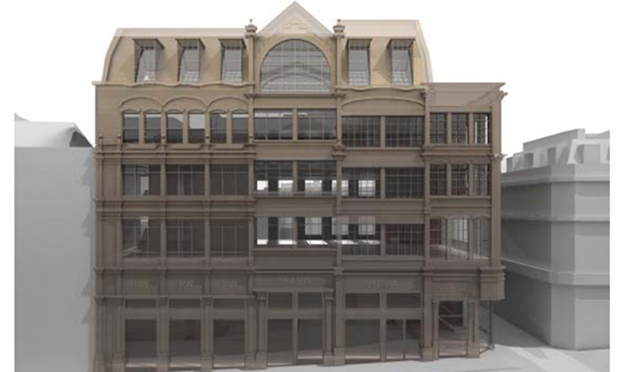 A Farringdon office block is to be cloaked in a “ghost veil” mesh,  despite the objections of residents and businesses in neighbouring Bleeding Heart Yard.The five-storey building at 20-23 Greville Street was described as a ’70s monstrosity’ by one councillor during a debate at Camden’s 20 September planning committee meeting.

Property developers Seaforth Land secured permission to reclad the building in perforated brass, which  is intended to replicate the appearance of the late-Victorian design by Spencer W. Grant – from a distance.

However, neighbours of the block, which is located within the Hatton Garden Conservation Area, were present to voice their objections.

“This work has not been acknowledged in the officers’ report, denying members the opportunity to see the strength of opposition that this proposal has engendered.

“No account has been taken of the planning history of the site. The current building’s footprint was set after two applications in the 1970s were refused.

“Why does the subsequent creation of a conservation area not provide this area with more protection rather than less? This development adds a further two storeys and steps right into the Yard, significantly further than the two rejected 1970s proposals.

“The drawings make it look like solid masonry, but it’s not – it’s a dull and uniform metal mesh.

“I urge members to refuse this application because its scale and overbearing bulk would be detrimental to the character of the conservation area. The materials are unsuitable, it fails to provide an accessible route to its main entrance and it reduces its accessibility to buildings in the Yard.”

Wilson added that claims the veil would replicate the original building were untrue, saying the roof was 3.5 metres higher, with gables six metres higher and mansards five metres higher.

Development manager Edward Sneddon, representing Seaforth Land, rebutted the complaints, claiming that objections about accessibility were based on a misreading of the plans.

Sneddon said: “We’re aware of the concerns from businesses in Bleeding Heart Yard. We respect these and take them very seriously. It’s our intention to minimise disruption to our neighbours.”

Seaforth has promised to set up a  working group during the construction process to work with neighbours to deal with any issues that may arise.

As part of the agreement, 20-23 Greville Street will also include 138 square metres of affordable jewellery workspace, in order to reflect the character of nearby Hatton Garden.

Cllr Danny Beales (Lab, Cantelowes), cabinet member for investing in communities, said: “I can see why it would divide people in its unusual nature, and it’s certainly an improvement for me on the 1970s inactive, dull frontage.”

Concurring with Cllr Beales, Cllr Marcus Boyland (Lab, Gospel Oak): “The building is a 1970s monstrosity, and I think they have worked very hard to work out a sympathetic covering for it, so well done to them.”