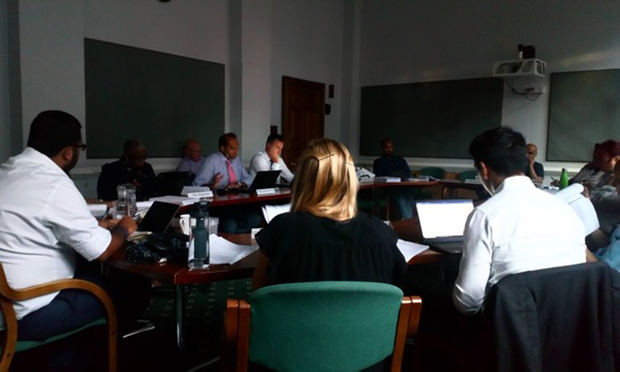 Due to a loss of power to the committee room’s lighting, the meeting was held in deepening twilight as the evening wore on, causing Cllr Rishi Madlani (Lab, Bloomsbury), chairing the meeting, to joke: “Austerity is at another level that we have to hold meetings in the dark.”

Councillors and officers in attendance at a 17 July meeting with investment managers Standard Life fed back on their impressions to the committee on the evening of 30 July.

The meeting with Standard Life held after the £1.58bn pension fund’s investment consultant, KPMG, informed officers in June that the firm had changed its opinion of the Standard Life Global Absolute Returns Strategy (GARS) from ‘Meets Criteria’ to ‘Significantly Fails to Meet Criteria’, prompting it to recommend a review of the fund’s investment.

GARS aims to deliver benchmark returns plus 5 per cent. However, Standard Life delivered a negative absolute return on its investment of -1.9 per cent in the first quarter of 2018, 3.3 per cent below target.

Independent advisor Karen Shackleton told the committee: “When we met with Standard Life, I didn’t feel they defended their failings particularly well.

“I wasn’t comforted that their investment strategies were robustly thought through.”

Shackleton also pointed out that GARS is losing money. Seventy-eight investors have withdrawn from the manager, with assets under management with the strategy falling by £2.7bn.

She speculated that Standard Life’s merger with Aberdeen Asset Management in March 2017 could have contributed to the recent poor performance.

KPMG’s annual due diligence review of the Standard Life GARS highlighted a drop in the quality of idea generation as a key reason for persistent underperformance.

Nigel Mascarenhas, Head of Treasury and Financial Transactions at Camden Council, said: “We were trying to find a manager that replicates what a hedge fund does.

“We had them on board not to shoot the lights out, but to deliver on stability. They say that they’ve been here before with the financial crisis and recovered. We should keep them in the crosshairs.”

However, Cllr Madlani said that Standard Life at the meeting had demonstrated ‘slightly garbled economic understanding. I lose confidence in Standard Life from this meeting.’

Speaking at the committee’s opening, Mascarenhas counselled taking the firing of a manager by the fund seriously: “The cycle of the Pension Fund is valued every three years, so there’s a natural ebb and flow over that time that we do consider.

“Typically you’d judge a manager every economic cycle of three to five years. If you fire a manager in a period of loss, you crystallise that loss, so it’s not something we’d do lightly.”