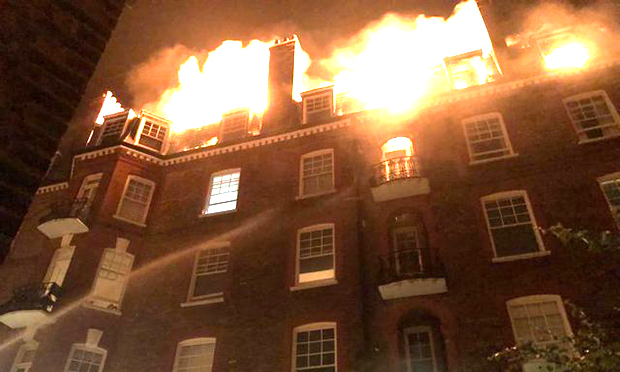 A large fire in West Hampstead has now been brought under control.

The blaze at a block of Victorian flats in Inglewood Road was tackled by around 100 firefighters in 15 engines, according to the London Fire Brigade (LFB).

Firefighters worked through the night to put out the fire, which was believed to have started on the fourth floor, and was visible for miles.

Station manager Claiton Murray said: “Due to concerns that the roof could collapse inward firefighters evacuated residents from the top floor.

“In addition fire crews assisted two people from the first floor and a number of other residents self evacuated from lower floors.

“The London Ambulance Service have confirmed that no one was taken to hospital as a result of this incident.”

Around 50 residents have used the Black Lion Pub on West End Lane, which opened its doors to residents, as a rest centre.

Camden Council has stated that it is providing support to residents affected by the fire.

Councillor Peter Taheri (Lab, West Hampstead) said: “Terrible news to wake up to – the thoughts of our community are with those affected. I hope, most importantly, that everyone is safe and not hurt. The council will be offering what support we can.

“The LFB and London Ambulance Service say that no-one needed to be taken to hospital. Amazing, really, given the scale of the fire. Sadly I fear that homes won’t have avoided damage. I don’t want to imagine where we’d be without our amazing emergency services.”

Councillor Jonathan Simpson (Lab, King’s Cross), Cabinet Member for Promoting Culture and Communities, is advising residents affected by the fire and in need of help to contact either Camden Council or the office of Tulip Siddiq MP.