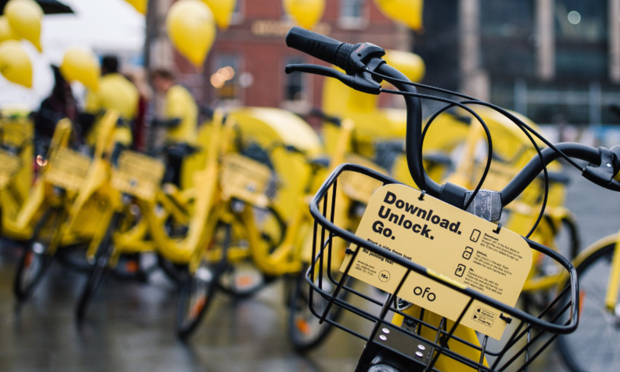 Dockless bike firm ofo has vowed to prevent vandalised bicycles being left across Camden as a fleet of 200 yellow rental bikes is introduced across the borough.

The Chinese bike-app scheme, sometimes called “Uber for bikes”, which was launched in Camden today in collaboration with Camden Council, said its marshals will find and fix any broken or abandoned bicycles.

It follows reports in neighbouring Hackney of ofo bikes being vandalised, stolen, or left strewn across streets or in rivers.

When asked by the Camden Citizen what it was doing to avoid this, Camden Council said the launch was part of a 12-month trial and would be reviewed.

A Town Hall spokesperson said: “The council has worked with ofo on their Camden launch.

“We have initially limited the trial to 200 bikes and are managing their parking in Camden by having developed a series of over 50 virtual parking hub locations throughout the borough, which are displayed via their app.”

They also referred the Citizen to ofo’s press team.

Ofo spokesperson Matthew Sparks said ofo marshals will be available to retrieve or fix discarded or damaged bikes, either by foot or in their “ebike tow truck”, which can carry up to seven bikes.

The marshals can take bikes back to the ofo depot for repairs if needed and can track down Camden bikes left in other boroughs.

He also said of the 12-month trial period: “It’s less of a trial and more of a launch with a caveat.

“There’s an option to not let us [continue] if things go badly.”

John Chamberlain, co-ordinator of Camden Cyclists, the local branch of the London Cycling Campaign, told the Citizen he welcomes the ofo bikes to Camden.

“Anything which makes it easier for people to cycle is a good thing”, he said.

On vandalism and theft in other boroughs, he said: “There are issues as there are with any bikes.

“If they get dumped and are obstructing the footway, that’s a problem.

“But ofo seem responsible and are saying all the right things.”

He added: “If it encourages people to cycle who otherwise wouldn’t that’s got to be good.”