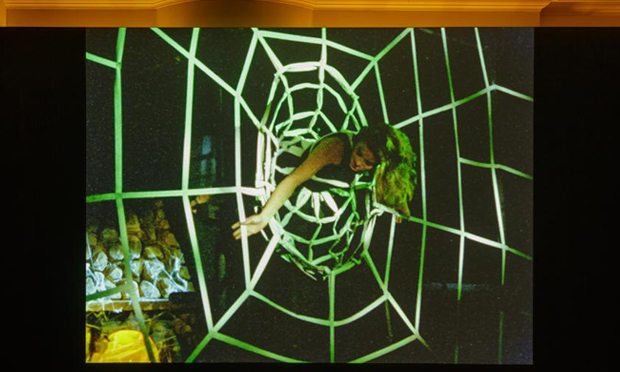 “A woman is a sack made to endure”. While such attitudes may have only recently broken through the surface of social media consciousness in any big way, the critique of patriarchal values and behaviours has been a mainstay of the art world for some time. So the bar for innovation is high.

This pair of ‘sister’ exhibitions by Ericka Beckman and Marianna Simnett probe attitudes toward exploitation, especially of women. Both artists use the medium of the video installation to explore portrayals of abusive behaviours in modern media and traditional culture, but there the similarity between the shows ends.

The work by established American artist Ericka Beckman includes a collection of films made over three decades. Her combination of digital art and old-fashioned acting frames exploitation as a staple of action films and video games and explores the evolving relationship between technology and gender. 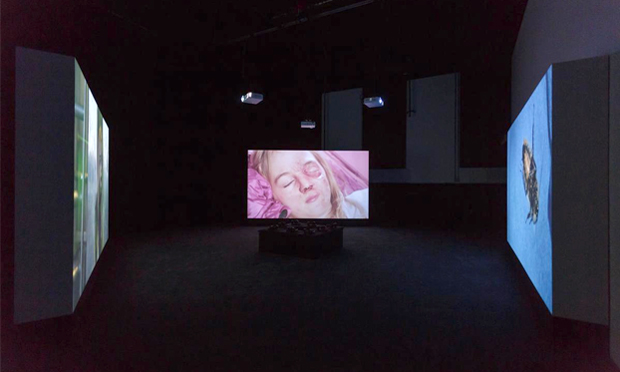 Emerging British artist Marianna Simnett presents a trilogy of videos, screened simultaneously in a triangle of screens. The viewer is invited to stand or sit in the middle and don a headphone allowing them to switch between channels. The films navigate themes of innocence and guilt, (re)production, and violence against the body (including the woman-as-sack comment above). Made between 2014 and 2016, they examine different aspects of corporeality through the juxtaposition of the commonplace and the grotesque.

Together the exhibitions are more than the sum of their parts. Through evocations of horror and what Hannah Arendt called ‘the banality of evil’, they pull askew everyday stereotypes of accepted behaviour and succeed in disturbing even the désabusé metropolitan gallery-goer.