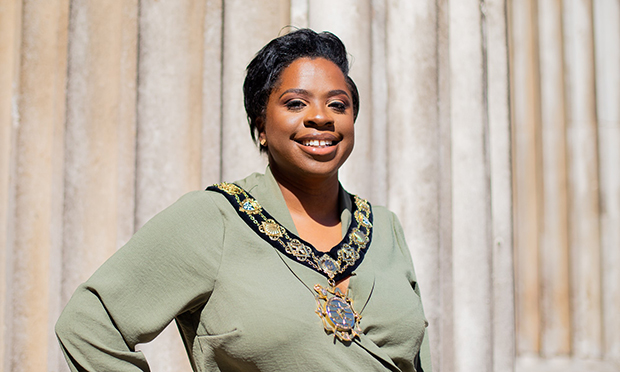 Camden’s mayor has called for Black children to be allowed to enjoy their childhoods like their white peers following the Child Q scandal in Hackney.

Cllr Sabrina Francis said the scandal, which saw police strip-search a Black schoolgirl, was “a really stark reminder of how different the world sees girls who look like me and how that affects treatment”.

She said what happened to the 15-year-old was “one of truly the most shocking and horrible things I have ever had to hear about in my life”.

Francis started her career at a charity that aims to get disadvantaged children into higher education and is an expert on digital engagement.

She was awarded the British Empire Medal in 2017 for services to the University of London.

Speaking to collegues at full council, she called for children to be respected as young people and for everyone to be treated equally.

She described her experiences of people questioning whether she really was a mayor.

The Bloomsbury representative, who became mayor last year, said: “I’ve seen what the world can be like. People can be very, very nice to a Black woman if she has a chain.

“I have been in lots of predominantly white spaces over the last 10-and-a-bit months and it has been incredible to move around in those spaces and to be treated as an equal because that does not happen often.

She recalled a recent event she attended with other mayors, during which she was repeatedly asked if she “was really a mayor”.

She added: “I didn’t really have to wonder why I was the one they were questioning ‘Was I really a mayor?’ and ‘What borough are you really from, is that really a mayoral chain?’.

“I think we all know why that probably happened to me and not other mayors.”

Cllr Francis said there was also a shocking incident two years ago when armed police turned up at the home of a Camden resident because of a report “of a Black man with a gun”, when it was actually a child.

She called out the adultification bias where Black children are “seen as older than they are”.

She said: “Black girls are seen as ‘streetwise’ and women, when they are still children and we know that this leads to victimisation, not being taken seriously and a lack of understanding when we’re assaulted or involved in mainly crime through grooming rather than anything else.

“Black boys are seen as a threat and often seen as men at as young as the age of 10, and we know that leads to increased sentences and increased use of discipline in the education system.

“We all have to really think carefully about what that does to our children and what we’re robbing them of.”

She said there needs to be changes so “Black children can have a childhood and be children for just as long as white children”.

Responding to the Child Q scandal, the Met’s deputy commissioner Laurence Taylor said police will get training to prevent adultification of children.

It will include an “awareness of structural racism, addressing the misuse of the term ‘streetwise’ and reinforce the need to view children as children with a safeguarding mindset alongside the use of our lawful powers”.

← Deliveroo kitchen told to ‘pack up and move on’ in victory for Swiss Cottage residentsLocal elections 2022: Candidates gear up for fierce contest in Camden →