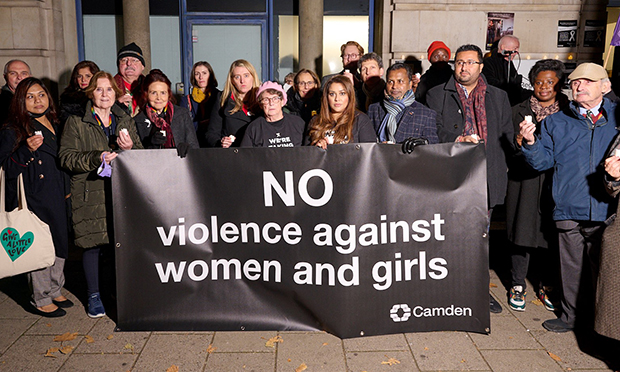 “Women and girls shouldn’t have to make changes to their route to feel safe,” a resident told Camden councillors this week.

The person was speaking during a discussion about violence against women and girls at a full council meeting attended by borough leaders and police.

Later, speakers who work with survivors of abuse echoed these concerns.

The debate followed the death of Nicole Hurley, who was stabbed at her home in Primrose Hill last month.

Council leader Georgia Gould said: “We saw a community grieving at the vigil for Nicole Hurley, who was a wonderful mum.”

Campaigners held a candlelit vigil outside Camden Town Hall before the meeting and read out the names of women who have died.

Cllr Gould told the meeting: “It is heart-breaking that two women a week are killed by a partner or former partner.”

The resident who brought a deputation recounted her fear when she was followed home by a group of men who stopped their car, got out and shouted at her.

“I was terrified,” she said, before explaining that she was able to take refuge with a neighbour, who later walked her home.

She spoke out after a woman was assaulted on the Black Path near the Thameslink station West Hampstead.

She added: “This was in broad daylight and many women and girls in the community, including myself, are now avoiding this route between Broomsleigh Street and West Hampstead Thameslink Station due to safety fears.

“Women shouldn’t have to make changes to their daily lives in order to feel safe. We shouldn’t have to weigh up the risk and take a deep breath before embarking on a journey through any path, park or other public space.”

She pinpointed problems at Black Path and at Wayne Kirkum Way in Fortune Green, which links the Sidings Estate with Mill Lane.

She said CCTV could be “effective and impactful in providing reassurance and a sense of security” and that they are just two of the routes that need better safety measures.

She also pointed out that certain places could benefit from mirrors, proper working lighting and regular cutting back of overgrowth, which would make women feel safer and deter crime.

She urged council bosses to think about women and girls when designing and planning public spaces and walking routes.

She told the Citizen she was “amazed” how quickly CCTV was installed after she raised the issue.

Recognising misogyny as a hate crime is a first step to confronting violence against women and girls, she added.

“It’s really important for men to engage in acts of anti-misogyny.”

Angela Mason, cabinet member for families, said: “We need to move from just supporting victims and survivors to actually trying to prevent violence against women and girls, to call out misogyny, to call out toxic masculinity, to punish perpetrators where it is necessary.”

Cllr Nadia Shah said “harassment and violence against women is endemic in the UK”.

Kalina Shah, from Solace Women’s Aid, highlighted the plight of women with no recourse to public funds, who face a barrier accessing services, which can mean they have to stay with their abuser.

Ella Schlesinger, head of Sixth Form at Parliament Hill School, said students are helping to design work on the issues they face.

It follows a national Ofsted report which found the majority of female  students may have experienced sexual abuse.

“The personal is political – to make violence against women and girls socially unacceptable,” she said.

Cllr Luisa Porritt said police need to rebuild trust, which is at an “all-time low” after the murder of Sarah Everard by a serving police officer.

He said the Met is “capable and caring”.

Cllr Oliver Cooper said centuries of misogyny and harrassment must end: “I see it as an issue for all of us. The onus for men is to listen, to heed and to learn and then to act to make sure we drive through and drive out that behaviour.”

Cllr Sian Berry said: “If we really want to measure ourselves, we need a zero target for violence.”