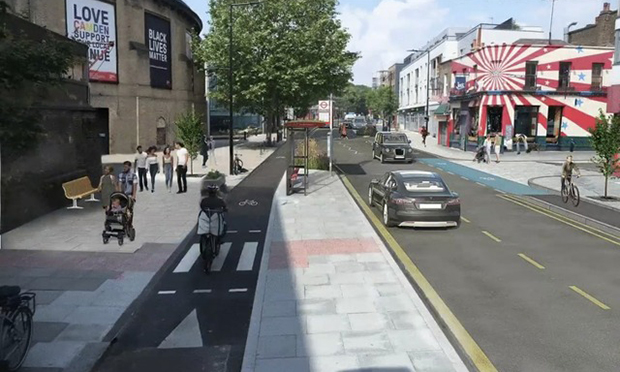 Residents are being asked what they think about a traffic-calming trial on a busy road in Camden which was brought in during the pandemic.

Camden Council made changes along Chalk Farm Road between the junctions with Prince of Wales Road and Castlehaven Road and at the junction of Ferdinand Street and Juniper Crescent in July 2020.

More than 1,660 cyclists use the road every day but it has “a poor road safety record, particularly at the Chalk Farm Road/Ferdinand Street/Juniper Crescent junction”, according to the council.

The council said the trial was designed to make it easier for pedestrians and cyclists on Chalk Farm Road and to improve access to the Morrisons supermarket and housing site on Camden Goods Yard.

The scheme was tweaked following feedback about parking and loading around Chalk Farm Road.

Transport bosses now want to hear how residents feel about making the changes permanent and about the alterations being mooted.

One of the changes being proposed is a bus stop bypass – a cycle track cut into the pavement, turning the bus stop into an island –  between the junctions of Harmood Street and Hartland Road. This would see a new signal pedestrian crossing introduced.

The council said: “The new bus stop will better serve routes from Ferdinand Street and provide better access for pedestrians visiting Camden Market and nearby attractions.”

It also plans to plant more trees on Chalk Farm Road and move a bus stop away from Haverstock School. Transport bosses think the latter will make it easier for people visiting shops and attractions and reduce congestion outside the school at closing times.

Parking for taxis would also be moved from outside Camden Market and would be shared with a loading bay, to allow the bike track to continue.

The changes saw a 17 per cent increase in the number of people walking on Chalk Farm Road in early September compared with October last year.

There was an average 192 per cent increase in daily bike rides on the street, according to council figures, with 1,664 cyclists recorded on a single day in September, compared to just 570 last October.

John Chamberlain from Camden Cyclists said: “We are keen to see [the scheme] become permanent. It is pretty well engineered.”

He said the road was already earmarked for improvements before the pandemic.

Motor vehicle numbers in Chalk Farm Road dropped by 10 per cent from 11,338 last October to 10,192 in early September.

Meanwhile, Prince of Wales Road saw a five per cent reduction in motor vehicles in the same time period, while bike rides increased by 198 per cent.

The consultation runs until 11 October and can be found at: Chalk Farm Road Walking, Cycling and Road Safety Improvements – We Are Camden – Citizen Space.

The council is holding a drop in session at the Castlehaven Community Centre on Castlehaven Road between 4pm and 9pm on Thursday 30 September.