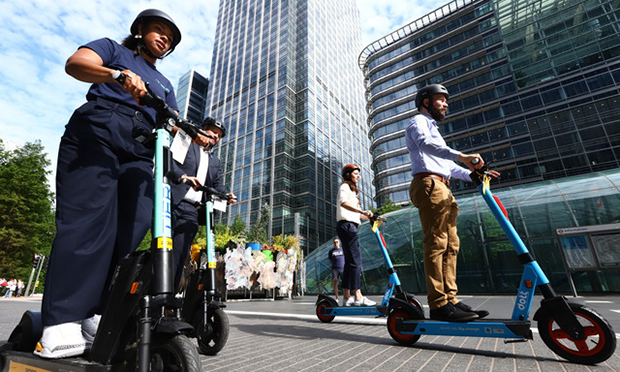 The e-scooter trial is coming to Camden to see if they can be allowed on the streets of London.

Camden is the 10th council to join the trial of rental e-scooters which started in June. There will be 197 e-scooter bays in Camden from Monday (27 September).

It is still illegal to use privately owned e-scooters on public roads and riders cannot go on the pavement.

Riders in Ealing, Hammersmith and Fulham, Kensington and Chelsea, Richmond, Tower Hamlets , the  City of London, Lambeth, Southwark and Westminster are also involved in the trial.

Camden put the issue to residents in the summer in what is thought to be the only council consultation on any of the 32 trials in England.

Cllr Adam Harrison, cabinet member for a sustainable Camden, said: “We want our streets to have more space for everyone to walk and cycle, for you to be breathing cleaner air, for children to get to and from school safely, and for businesses to be able to flourish.

“Rental e-scooters could be one solution, providing an alternative mode of transport that is emission-free, potentially reducing the number of motor vehicles on our streets and easing pressures on the transport network.”

The Camden Citizens’ Assembly on the climate crisis wanted the council to  encourage electric transport with infrastructure such as chargers and incentives.

The council said: “The trial is particularly important as a means of helping to reduce the potential impacts of a car-led recovery as Covid-19 restrictions continue to be eased.”

Out of 435 people who joined the consultation, 272 people told the council they were not keen on the trial and said they were concerned about accidents.

Analysing the consultation, the council said: “Public opinion of e-scooters is currently largely based on illegal privately-owned vehicles that can in some cases be ridden in a dangerous manner and can potentially be used for criminal activity.”

Seventy-one per cent said if the trial went ahead they supported the use of designated bays, with 60 per cent backing the use of cycleways and cycle tracks in Camden.

Most of them liked the idea of no-go zones and over half rejected the idea of e-scooters going both directions on one-way streets.

The council plans to make all of its parks no-go zones to prevent rental e-scooters from accessing them.  There will also be no-go zones in  market streets and Healthy School Streets because people are likely to be walking in the carriageway.

The e-scooters can only be parked in designated places and cannot be ridden in certain no-go areas, where they automatically stop. They slow to eight miles per hour in go-slow areas.

Their top speed is limited to  12.5mph and the e-scooters can only be ridden in the participating boroughs.

Since the trial in London started, people have taken to the streets 165,000 times and the average trip is 22 mins, covering 2.8km.