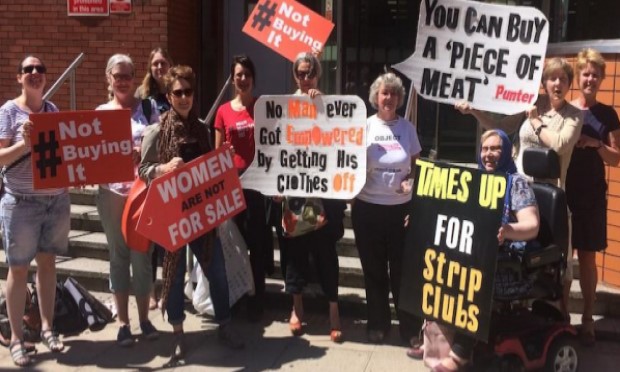 An updated council policy on strip clubs has been condemned as a “whitewash” by campaigners.

The council has published a draft version which details a number of changes to its approach to sexual entertainment venues, including a greater emphasis on dancers’ welfare, standard conditions over CCTV, curtains and lighting, and the requirement for clubs to keep incident logs.

The Town Hall would not confirm whether it is actively investigating claims of clubs being fronts for prostitution by campaign group Not Buying It.

However, elsewhere in the document officers state that allegations against currently licensed premises are not included in responses to consultations on the policy, as they may affect “current investigations”.

Not Buying It campaigner Dr Sasha Rakoff said: “It is exactly the same as the old one: ’No clubs are actually appropriate anywhere, but we will keep on licensing all the ones we already have.’

“This is the usual whitewash by a council. Even when they know what it is they are licensing, that they cannot regulate this industry, that it is a hub for exploitation and abuse, they continue to license it.

“The council still has not completed its investigations into the private investigator reports we gave them over six months ago.

“Have the police even been informed of brothel-keeping and suspected trafficking?”

Other changes proposed by the policy is the establishment of a ‘performer’s forum’, allowing them a safe space to discuss concerns, and a broad definition of a ‘dance’ in the policy – ‘an interaction with the intent of entertaining the customer’.

Responses to the updated policy in the attached consultation are mixed.

The Camden branch of the Women’s Equality Party called the findings of covert investigations of the clubs “very disturbing” whilst distancing themselves from the filming of women undercover without consent.

The WEP added: “If the owners and managers of these clubs are swearing to uphold all these conditions as imposed by the council, but in reality are blatantly not doing so, then how – regardless of how many conditions the council imposes – can these clubs be trusted to operate within the rules?

“There is so much in the policy document that works on the same basis, presupposing that by the imposition of more rules, conditions, CCTV coverage etc, the clubs will be more ‘regulated’ and thus operate fairly and safely.”

A trade union representing dancers working in strip clubs, the name of which was redacted, broadly supported the licensing, monitoring and enforcing of conditions on sexual entertainment venues (SEVs) as a means to increase workers’ safety and welfare, while cautioning that it could not support any policy that resulted in job losses for its members.

The union said: “Strip clubs in Camden support many local workers and their families. Any change to licensing policies, and, especially changes that could lead to the reduction in the number of SEVs, pose a direct threat to these workers’ livelihoods.

“Our members are extremely anxious about this potential and the consequences this will have on their ability to support their families and pay for housing, bills, food and university fees.

“We request that the committee considers this angle very seriously when making decisions baout the number of SEVs and the way licenses are granted.

“In regards to existing and potential new SEVs, we request that the council makes workers rights a key requirement for licensing, including enforcing access to all the legal rights and protections that are available to workers in other industries.”

A representative for an unnamed SEV operating in Camden pointed to advice in the councillors’ handbook over licensing policy that ‘the key thing to remember is that less is more’, adding that the advice called on councillors not to “micro-manage” venues through the use of conditions, going on to ask for the imposition of the policy to be delayed.

A Camden Council spokesperson said: “The council recognises the importance of ensuring that its policies and procedures relating to licensed sex establishments are robust and align with the relevant legislation, and is also fully aware of the views held by campaign groups such as the ‘Not Buying It Group’.

“The revised policy was informed by feedback obtained by the Council during a 12-week public consultation which took place earlier this year.

“The evidential material provided by Dr Rakoff and the ‘Not Buying It Group’ was reviewed and assessed. However it is considered that it would not be appropriate at this stage to comment on any activity which may be linked to the information supplied.

“The council have taken legal advice with regard to both the current and proposed sex establishment policies, and it remains confident that the licensing framework complies fully with the relevant statutory requirements.”