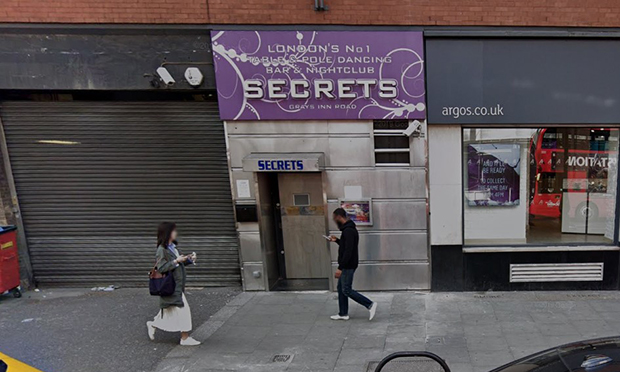 A Camden strip club has had its licence renewed despite councillors admitting to being “disturbed” by evidence of past incidents of assault, anti-social behaviour, soliciting, and sexual touching presented by campaigners at other venues operated by the same chain.

Secrets on Grays Inn Road like all other venues of its type has been shuttered for the duration of the coronavirus crisis, but nevertheless had its sexual entertainment venue (SEV) licence up for annual review by Camden councillors.

Dr Sasha Rakoff, CEO of campaign group Not Buying It, presented to the committee the evidence as part of an unsuccessful attempt to convince councillors to not renew the venue’s licence on the basis of its locality, while claiming that council investigations would never be able to detect licence breaches due to security staff being able to radio ahead.

Rakoff said: “It is astonishingly easy to shut down a strip club, as the law states you can refuse to relicence an existing strip club on the grounds of locality. There does not have to have been any change in the locality or anything else. The club cannot take any legal action against you if you refuse to relicence for this reason.

“All you need to is give due consideration to the fact that the club has a licence. Your policy already states that there is no location anywhere in Camden where a strip club is appropriate. On top of that, both clubs are close to sensitive venues.

“The character of the area is constantly changing because of the sex touts, as police call them, in the vicinity of all your strip clubs. They are there because of the clubs and they are unstoppable. The clubs themselves are changing the locality and for the worse.

“You must consider breaches at the other clubs in this chain, as it goes directly to the suitability of the impact. The adverse impact of things like sexual touching cannot be mitigated. It is the business model of the industry, and it is virtually impossible to know if it is happening.

“You must refuse both clubs on the grounds of inappropriate locality, which you are fully entitled to do, and this cannot be challenged by the club. Support all its lap dancers out into safe alternative work.”

Town Hall documents accept that the council received a complaint alleging that Secrets misled the council on the last renewal, in that they have had a string of incidents based on information submitted by the Metropolitan Police Service as part of a representation at a renewal hearing for a difference SEV premises located at Eversholt Street.

The council have said that the incidents referred to, including one assault which Secrets’ lawyer Philip Kolvin amounted to an “unlawful wounding,” relate to a premises no longer operated by Secrets, though Rakoff maintained that Secrets did operate the venue at the time.

Kolvin said: “There have been objections from campaign groups and their supporters who object to SEVs as a matter of principle. First there is an argument that sexual entertainment is inherently harmful. That is clearly a sincerely held view. That is an argument for Parliament, and not with respect, a relevant ground for refusal under the legislation.

“Secondly there is an allegation that Secrets lied on the last occasion the matter was before you. In answer to a question, I stated that of the twenty-odd renewals of our clients three Camden premises, there had not been serious assault.

“However, it was drawn to my attention after the hearing that there had been an assault in one of the premises three years previously, which was serious. We thought it right to put that straight, so the following day, Secrets gave a full written explanation for what had occurred, and apologised, both on its own behalf and on my behalf.”

According to council policy, there are no locations in Camden where it is appropriate for a sex establishment to be located, with a presumption that any application for a licence for an SEV should be refused, though this presumption does not apply to licence renewals.

Kolvin went on to argue that the premises on Grays Inn Road had “never been the subject of a review or of a refusal to renew or a prosecution,” while accepting that there had been “minor breaches” at a separate venue on Parker Street, which Secrets said they had rectified.

The lawyer also added that there had been no change in the character of the area since last year. While Rakoff argued that the presence of the club itself had an impact on the area, pointing to concerns raised over sex touts outside certain clubs, Secrets argued back that, despite the club being closed during the crisis, touts continued to operate, guiding punters to brothels in the area, with proprietor Stephen Less insisting that touts were the “bane of our life.”

Cllr Angela Mason, who is also cabinet lead for best start in life, quizzed Kolvin on whether evidence presented by Not Buying It led him to give no weight to cumulative impact, with the council’s documents showing a list of serious incidents which had taken place at Secrets venues, including a case of grievous bodily harm in which a lap dancer had required stitching after being hit with a bottle.

Kolvin responded: “Probably the most serious incidents took place at Secrets in Eversholt Street, including one incident that amounted to an unlawful wounding. That year was marked by a police representation that referred to those incidents and said as a result wanted to have conditions added to the Eversholt Street licence and conditions were added.

“If you took any licensed premises and looked at incidents that had occurred at it over a five-year period, there would be a list of incidents. If you were to take four and look at it over many many years, you will end up with a list of incidents. The most serious year happened in Secrets Eversholt Street, which was a more troublesome premises.”

Police had been due to highlight concerns in relation to touting at the chain’s Parker Street premises, but the meeting had to be adjourned due to Less, who is recovering from Covid, being taken ill.

When asked if she was content to renew the venue’s licence, Mason said: “I don’t know if can use the word content, but I do agree. I am disturbed by the evidence that we’ve heard, both in relation to touting and in relation to a number of instances at premises which are owned and run by the applicant in this particular cases. I note that only one of those instances related to Grays Inn Road.”

Cllr Leo Cassarani added: “I’m disturbed bythe evidence but it hardly relates to this club, so I think we have to take it within context. I can only conclude that the fact that the objectors had so little to say about the Grays Inn premises taht there is not evidence that anyone’s aware of of major wrongdoing at the premises.

“What we have been given tonight is pretty threadbare when it comes to the club we are considering, and it would be difficult to go down the route of looking at other branches in the same chain and make inferences about the suitability of the applicant from that.”